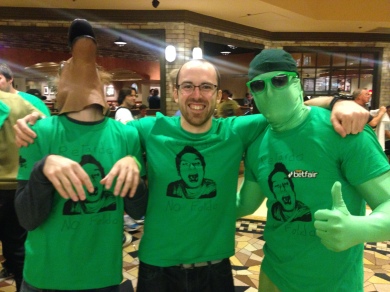 When I arrived at the lobby of the Penn and Teller theater a week ago, there were a whole lotta people dressed more or less like this waiting to get in. It seemed weird, as there was no Irish player in the final nine These were the French-Canadians. Since one of their own, Jonathan Duhamel, one the Big One (click on his name for one of the most brutal and pivotal beasts in WSOP history) in 2010, they’ve had there own poker boom, had a great series this year, and another Quebecois made it to the final table, Marc-Etienne McLaughlin. They told me the green was for his Irish background, but I wasn’t sure if they were putting me on. (They weren’t.)

If you watched on TV, the people screaming “LA-RRY, WAL-KER” once every round (when their man was in the big blind, urging the other players all to fold, to give him a “walk”), were these guys. I haven’t checked the stats, but McL. got a whole lot of walks, certainly the most at the table. They were obnoxious as hell, but unlike the almost vicious Riess contingent, they were also good-natured and very inventive and fun. Their man played some exciting, aggressive poker too, before bowing out sixth.