So, we’re about a week away from the November Nine!!!  Starting tomorrow, we’ll jump way ahead to Days Six and then – as they get down to the magic number – Day Seven of the Main Event – we’ll catch up on some great Days Four and Five hands later. Tomorrow I’ll also introduce you to the extremely camera-elusive Player 1 and, I’ll give this much away, his roller-coaster ride while attempting to make the final table is really something to follow. Sadly (for us, and happily for X, who likes being out of the spotlight), web updates are what we have to follow it with, as ESPN blew coverage of nearly all of his fantastic, improbable run.

Ivey 2nd at his table behind Steinberg (400k to Steinberg’s 500k, both very healthy stacks, with around 1,000 left and no one yet at a million chips), with James Hudson – who we watched hit quads earlier – with 360, The blinds are at something like 2000 & 4000. Ivey is under the gun (first to act, the worst position to be in at a poker table)  with 3-3. for many pros and amateurs alike, a foldable hand from his position with his chip stack – but we’re not Phil Ivey, who opens for 7,500. Facebook engineer Ola Okelola calls with AQ-off. In lat position, Steinberg “wakes up” with 10-10 and just calls (this too is somewhat unorthodox, as many would raise and try to win the pot right there), and a fourth player, recent Bracelet winner Tony Gregg, calls. Going to the flop, the pot is 36k. 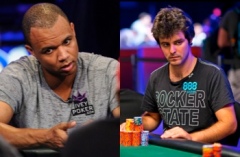 Ivey and Steinberg, thinking it over.

The flop comes 3-10-A, with two spades giving Steinberg top set and Ivey bottom set. Fireworks must ensue, and it looks bad for Ivey, though few would have predicted just how bad. Ivey, first to act, bets 16k. Ola, with his aces, raises to 41k. Gregg, with no part of the flop, folds. Steinberg slow plays his three tens, just calling the 41k, and, back on Ivey to call or raise, Ivey ponders what to do for a while. There’s now 134k in the pot. Ivey thinks for a while, then, first muffled, then repeated, makes a huge overbet, all in! Ola quickly folds and Steinberg just as quickly, calls (or at least, that’s how they show it on TV), and two quick cards later, just like that, the great champion, stunned, unclips his mike and wanders out through the cheesy arbor of the ESPN feature-table set. Here it is:

Just like that. There’s been a lot of discussion online of this hand and Ivey’s play. Some say that’s what happens when you play 33 under the gun, but that’s very tight thinking. Many suggest taking more care than Ivey did in the situation. He had a big stack, and his shove, of around a hundred big blinds into, sure, what had become, a very big pot (134k at that point), some would argue is a good play, scaring off any flush draw. Others, though, claim it was reckless, too much to risk, and that Ivey failed to consider how strong the trappy Steinberg must have been when he made that post-flop reraise.

Would Ivey have ended up losing it all on the turn or the river? Perhaps. But still, great players make great folds, and Ivey is known as a man who doesn’t get in (or if he does, is nearly psychic about getting out of) these situations, about whom I once heard Mike Matusow (a talented but volatile pro) say, “How can the best player in the world also be the luckiest player in the world? It’s just not right.” But on this Day Three, from what we saw on TV anyway, Ivey was just not quite right.

Beyond Ivey either just being out of sorts or not fully in the game, or, perhaps even worse, tilted by the solid play of a farmer named Mader, (which he had, and strangely so, seemed earlier) his demise illustrates one of the main goals of poker, and one of the reasons I wish I never started playing.

You’re sitting at a table, with nine strangers, usually none of whom you know more about than you can surmise in the hours you sit together. Some of them you like and some of them you don’t (I usually don’t like writing or reading second-person narrative, but in this case I really do want YOU to put YOURself there, gentle reader.). And it really shouldn’t matter if you like the people at your table or not. If you’re playing right, you don’t look to beat the jerk who talks shit about his girlfriend at the table, throws cards at the dealer, and just bluffed you out of a hand like he does every goddamn hand. Not if you’re playing right.

If you’re playing right, you look to beat the guy who’s weakest, whether he’s (and, again, it’s nearly always a “guy,” a “he”) just a bad player or tilted from a bad beat or desperate because he doesn’t have the mortgage payment this month and really needs to cash in this tourney. You’re looking to take actual money away from that guy, from the weakest player you can find at your table. On Day Three of the 2013 WSOP Main Event, Phil Ivey, of all the unlikely people, was, at least arguably, that guy. Taking money from that guy at the table is, at times, is problematic for me. It would have been more than problematic for Sheila Berger.