Player X has yet to appear, but then again, none of the eventual final nine has appeared on camera either.

As coverage continues, controversial poker icon and loose-aggressvive, intimidating motherfucker, Michael “The Grinder” Mizrachi, takes his seat at the table with Ivey, Mader, and Co. Also at the table now is Max Steinberg, a moppety goofball, but a rising star over the past couple of years. They all have 300k-plus stacks. So does James Hudson, who hit those quads.

Speaking of which, here’s what it’s like, soon after hitting quads while sitting at the TV table in the Main Event of the World Series of Poker, to play a hand wedged between Phil Ivey . . . 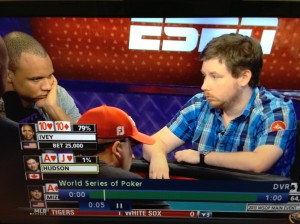 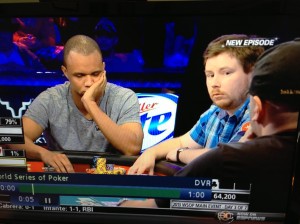 It’s also an example of how you can envy someone and not envy him at the same time.

Hudson had flopped top pair top kicker on a reasonable board, but got the hell out of the way when Ivey bet the flop, and Mizrachi was waiting to act after him. Turns out Hudson was right, he was way behind Ivey’s set of tens, but it was an awfully tight fold. Sometimes the intimidation factor can work against an Ivey – facing less formidables opponents, Hudson could very reasonably have likely stuck around and paid the set off.

Soon after that, Mader takes down a nice 180k pot and earns tons more respect with an extremely gutsy four-bet into Grinder on the flop when his A-8  hits the 10-10-8 flop, while Grinder’s K-J, off, missed. Several noteworthy bits here:

First, Phil Mader is starting to seem like a poker pro whose bankroll happens to come from farming.

Second, I’m a long, long way from ever being able to make that play into Grinder, no matter what my read. Dang.

Third, Mader showed one of the few advantages that unknowns can have over famous pros: Mader clearly knew who he was up against and what Grinder was capapble of (in terms of three-betting with air), while Mizrachi clearly didn’t.

One other element to note on the video below is when Steinberg walks over to his friends on the rail during the hand, he is openly dismissive of Mizrachi, although I’m guessing he didn’t realize he was that well mic-ed – I mean, it’s gonna be on TV later, there’s no point in making enemies with someone you see several times a year all over the world.

Young players have such little respect for Mizrachi and Hellmuth that it’s led me to almost root for these two guys I really don’t like at all. Mizrachi is 8th on the all-time cash list for tournament poker – 8th out of, like, zillions. Among his wins is last year’s WSOP $50k “Players Championship,” considered the pro’s pros’ tourney. Hellmuth is the all-time WSOP Bracelet winner and WSOP-cashes leader. Like ’em or not, these titans have thrived before, during, and after the boom. And yet, while young players respect Ivey, Doyle, even the detestable Daniel Negreanu for their skills, these two get nothing but grief – one, ostensibly for being too tight, the other for being too loose.