A few months ago, at a a tournament at Foxwoods, I was seated next to a guy who was maybe seventy-five. He was a bit round and a bit gruff and a bit grim. His clothes were the clothes men who spent a lot of time sitting around a table playing cards all the time used to wear. That is, clothes you wear if you don’t give a shit what clothes you wear. He looked like a gambler before gambling was fabulous. He wore a nice old, gold Rolex with a gold strap, though, and had a matching wedding ring long-wedged onto his stubby finger. He had maybe a hint of a foreign accent, one I couldn’t quite place from many years steeped with New York, or possibly Providence. He played solid poker and had very little to say. 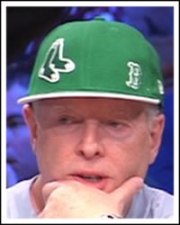 It was about 8pm. We had succeeded in making it past the dinner break of an 11am tournament. Sadly, in most one-day, or even some two day tournaments, making it past the dinner break is nothing but a point of pride; the cash doesn’t come for another few hours (if, say 160 start the event, maybe 18 cash, which might happen at 11pm or so).  We were at one of those points Dan Harrington, author of perhaps the greatest poker books ever, and a legendary player, calls inflection points (want to see some SERIOUS poker-math geekiness? Click that there link). In these tourneys, when blinds rise faster than most stacks can grow, these points are when a huge number players bust. In essence, they’re points in tourneys when shit hits fans, when rubber needs to meet road, when . . . (you get the idea, it’s chaos).

As the blinds (the forced bets two people put in each hand) have risen all day, most stacks have grown just a little, stayed the same size or dwindled, and people are having to go all in right off the bat, sometimes with much less than good hands. That is, for the majority of players, even big stacks who’ve played well and/or gotten lucky, for about nine hours, a day’s grind suddenly becomes a crap shoot. Right about then is when you start to see players with big stacks lose huge pots with hands like A-Q to hands like A-6 when the 6 or the straight hits. It’s when you see how hugely luck trumps skill. It’s when shit gets stupid.

It was around this point that my neighbor started shaking his head after one bust-out after another and resignedly murmuring, “This is a stupid game.” It became almost his chant, his mantra. We watched as a player at the other end of the table who’d played good, tight aggressive poker and worked up to a big stack, saw himself get in ahead and then lose half of it in just two hands against two much shorter stacks. The former huge stack had became an average stack, and soon it was his turn, got it in good with AK, only to lose to a loose call from a bigger stack with 78-suited, who caught a 7 on the turn.

In a few minutes, it was my turn to stand up and walk away. My neighbor remained, his stack still solid. As I left, I wished him luck. He gave me a gruff, “Take care,” shook his head, and said, “Stupid game.”